Here’s a contribution from Jenny Reed, one of our very own Ranch Representatives over at Vera Cruz Mountain Ranch. Thanks, Jenny! 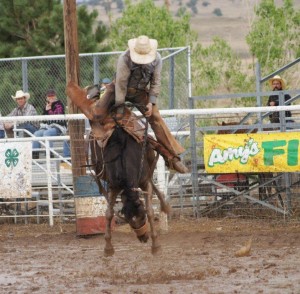 It’s been a busy week for Capitan New Mexico, just 15 minutes east and over the Indian Divide from here at Vera Cruz Mountain Ranch. The small town hosts the largest rodeo in the country (according to locals) holding rodeo events nightly for 4 days for points towards world titles. There’s another event however, that I believe shows more about the true composition of the local cowboy. It’s called the ranch rodeo where teams of 4 compete in several events for the best time in each event and an overall winner in cumulative total for all events. This years ranch rodeo had 16 teams! These teams were not all young boys either. There were teams with fathers and sons/daughters and teams of fathers competing alongside teams of their sons. The ages of competitors ranged from teens to grandfathers. The 6 events centered around working cattle from horseback and included doctoring, branding, trailer loading, stray gathering, and wild cow milking. Most all of these activities are performed on the ranches, but they usually aren’t timed. There can be some good natured competition among the local ranch hands which is where I believe this event evolved. 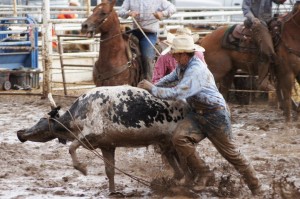 This year the badly needed rains came about the same time as the rodeos. The thunder heads would build up and start dumping on Capitan around 12:30 pm and the local ranch rodeo events started at 1:00 pm in an outdoor arena, regardless of weather, I came to learn. The ranch rodeos started on the 4th of July with the youth ranch rough stock riding for young cowboys/cowgirls ages 4-14. We were looking forward to watching the little tikes attempting to stay aboard their mounts whether it be sheep or steer for the required 8 seconds. When the lightening, thunder and rain started pouring down just before the event was to start, we ran for the truck and headed for home believing that surely the event would be cancelled. I learned the next day just how naïve and pampered I am. These young cowboys and girls learn early by example and experience that ranch life isn’t easy, life isn’t fair, and mother nature doesn’t always cooperate with your plans. They learn growing up that when there’s a calf to tend to or an obligation to fulfill that you don’t wait until the weather clears or for hard times get better. They learn that there’s a lot of things that you can’t control but the one thing you can is your own actions and if you make a commitment whether it be to raising cattle or riding rough stock, then you do the best you can do and you don’t stop until the job is done. The determination on many of the little cowboys faces showed that these lessons were being learned at a very early age. 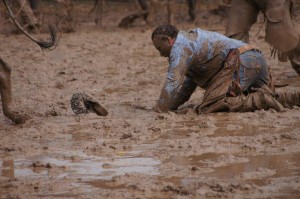 The adult ranch rodeo was held over two days on Friday and Saturday afternoons due to the large number of teams. The weather remained consistently uncooperative by continuing with the thunder, lightning and pouring rains beginning in the early afternoons. Thank goodness the metal stands were covered but it still got a little nerve racking for us spectators with the lightning. I never heard a complaint from anyone however. The closest thing I ever heard was a hope that it was raining as hard at their home ranch as it was here at the fairgrounds. The rodeo began each day with the national anthem being sung by the contestants and the Capitan grandstand choir. Not a verse was missed nor a heart not covered either by a cowboy hat or a hand. By 1:00 pm the arena was a deep, muddy, slick mess with thick soupy puddles in several spots. It was chilly, raining and windy but the judges in their slickers were mounted on their horses and in the arena ready to judge the first event when we finally decided to leave the dry comfort of our trucks in the parking lot and make a dash for the grandstands during a slight let-up of the rain. This was after everyone frantically searched for protection – umbrellas, slickers, jackets, sweatshirts, things that we haven’t needed for the past 2 years!! 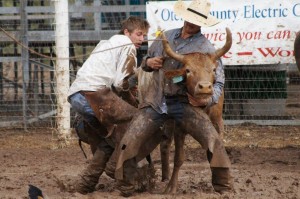 Typically 2 teams would compete simultaneously in each event. Now this means that there are 8 riders horseback along with 6 judges all horseback at one end of the arena, and for most events, 2 cows and 2 calves turned loose at the other end of the arena. All 8 competitors line up with their ropes under their arm and when the flag is dropped go charging down to the other end of the arena where the cows and calves are located and must rope their heads and/or their heels, jump off of their horse, lay the cow or calf down and secure it so that it can be doctored, branded, etc. Now as I said, these are all things that must be done on the ranch so the cowboys and their horses are pretty used to this activity. However, add to it the fact that the cowboys are being timed, that there are 8 of them going for the same 2 cows and calves, that they are only allowed 1 loop each (throw of the rope to catch the animal), it’s been pouring rain for over an hour, and the arena is now about 2 feet deep in muck, and the complexity multiplies by a significant amount. For us in the stands, it was thoroughly entertaining and for me I must say a little awe inspiring. 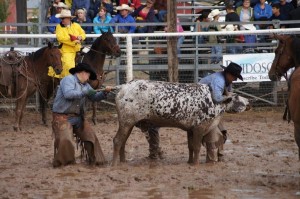 Growing up and being raised in Ohio, (both me and our horses), I was fairly confident that I would not have been able to coax Swoosh into the mucky arena horseback had it been completely empty, let alone with the chaos of the events going on. If by some chance I was able to get her in the arena long enough for someone to shut the gate behind us, had I tried to rope a calf, and jump off of her and run down my rope (which would be wrapped around the saddle horn) to attend to a squirming muddy cow or calf while 7 other riders and 2 cows raced by us, into us, over us, chasing/or being chased, she would not have stood her ground keeping tension on the rope nor would I have been able to ignore the inherent dangers all around and stick to my job just for the sake of the team or the event. I do believe we would have both run for the gate and tried to dive over. However, time and again the teams and their horses took on the challenge without hesitation. There were times that the mud was so heavy on the cowboys 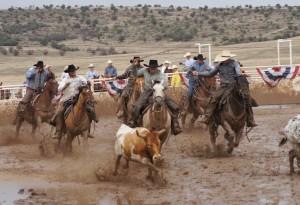 boots and chaps that they had to make several attempts just to get their legs up in the stirrup to mount again and race back to the finish line. Cowboys working on foot were thrown to the ground by the uncooperative cows in the thick, slippery surface and both they and their hats, trampled in the mud. Every time however, no matter their age, the cowboy got up, spit the mud from his mouth, found his hat scooped the mud out and placed it firmly back on his/her head, ready to go on to the next event or back to the task at hand. I was so impressed how no one backed out or quit because of the uncooperative weather or cow. I believe it’s how and where they’re raised. It’s not in their nature and never even comes to mind not to face an adversity and overcome it. Time and again a teammate would dive for the cows head only to be thrown down in the muck and lose his grip. He’d jump up and dive in again for a grab at her horns while she’d swing her head stumble in the muck and finally fall to the ground more often than not on top of him. There was no quit in any of these teams – it just wasn’t considered. There was no blame or excuses. It’s the nature of ranching and it is always tough and they realize that when they win there’s always a bit of luck in the deal. 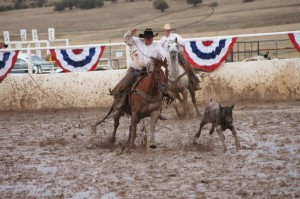 This ranch rodeo is not about money or prizes. There are no big sponsors here or cowboys with Copenhagen, Pepsi, or Rockstar plastered all over their shirts, chaps, jeans, hats, etc. The cowboys don’t compete for trucks, trailers, or national attention. They don’t compete in giant covered climate controlled arenas with tractors preparing the trucked in surface making it just right for roping or landing. The only cameras around are from the local newspaper and the family members gathering treasures of memories for years to come. The top prize for each event was $400.00 for the team. The entry fee was $80.00. The winners just might have had enough to cover their entry fees and the cost of the soap needed to clean up themselves, their horses, and their gear when all was said and done. It was not enough to cover the unfortunate ones whose hat although pushed down tight on their head was dislodged during a scuffle with an uncooperative mother cow trying to be brought down and subdued. It was for the spirit of the competition and the fun memories and stories provided at their expense for the next generations and those of us lucky enough to witness the event. I will never forget it. I now realize how much of a city girl that I really am compared to these folks. But, I will continue to try to live by their example. I will not however, expect my horse to do so. 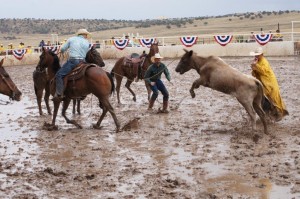 The end of the event was celebrated by handing over an envelope with cash along with ropes or headstalls to the extremely muddy but always grateful and humble cowboys with a soft applause from us spectators. There was no gloating by the winners, but lots of handshakes and congrats from fellow teams. Ironically, this years overall team winner included Justen Washburn. Justen’s sister Becky is a local veterinarian for Capitan. Her husband Tom who also happens to be a great roper, did a fabulous job announcing the events and joking about the cowboys and their various mishaps during the events. For those of you who don’t follow the PRCA, Justen Washburn is a PRCA world champion saddle bronc rider and has competed for many years on the tough but glamorous PRCA tours. He is also a camp instructor for the PRCA Championship Rodeo Camp. It doesn’t surprise me in the least that these are the types of roots that champions are made from nor does it surprise me that it is where this champion chose to return.

I Hope That You Had A Wonderful Independence Day!!

A special Thank you goes to Julie Carter for sending me some of her fabulous pictures. She is a talented author and photographer whose wonderful and humorous books inspired me to attempt to share with you life out here from my eastern point of view. 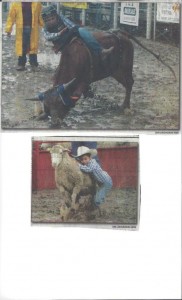