We love pi! Well, we really really love PIE, as in Pie Town pie, as in, the deliciousness that comes out of the Pie-O-Neer Café, but close enough!

“Pi Day is a holiday commemorating the mathematical constant π (pi). Pi Day is celebrated on March 14 (or 3/14 in month/day date format), since 3, 1 and 4 are the three most significant digits of π in the decimal form. In 2009, the United States House of Representatives supported the designation of Pi Day.[2]

Larry Shaw created Pi Day in 1988.[3] The holiday was celebrated at the San Francisco Exploratorium, where Shaw worked as a physicist,[4] with staff and public marching around one of its circular spaces, then consuming fruit pies.[5] The Exploratorium continues to hold Pi Day celebrations.[6]”

PS And, next time you ARE in Pie Town, do visit Kathy at the Pie-O-Neer, “Home of New Mexico’s Best Dessert”!

A Quemado stalwart has reopened its doors! The old El Sarape cafe in Quemado is back in business, with the old name but with new owners. The owner and accomplished cook is Lucricia Mendoza (575) 773-4999.

Several of our Ranch Representatives have stopped in to try out their menu and are big fans. Of special note are the items available with Chipotle Pork and the Huevos Rancheros. According to our taste testers, the menu also features a variety of American dishes and sandwiches, and the Reuben is a special treat! 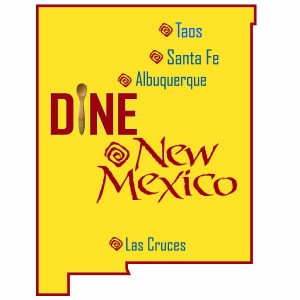 Forget about the diet: it’s time to experience the best of New Mexico’s cuisine in Santa Fe, Las Cruces, Albuquerque and Taos during the state’s third annual Restaurant Week, held March 4 through April 1, 2012. This year, the event is introducing the “Let’s Do Lunch” program, offering two- or three-course prix-fixe lunches in addition to dinners.

Santa Fe kicks off the culinary celebration, followed by Las Cruces (March 11-18), Albuquerque (March 18-25) and Taos (March 25-April 1). Around 100 restaurants will be part of the celebration, and there will be great lodging packages, cooking classes, wine and spirits tastings and more.

Some 100 restaurants statewide are expected to participate.  In addition to value-priced lunches and dinners, people can take advantage of great lodging packages and expand their epicurean horizons through a variety of cooking classes, wine & spirits tastings and other special events.

Visit www.nmrestaurantweek.com and click on each individual city for restaurant menus and prices, lodging deals and special events.  This site is changing daily between now and Restaurant Week, so be sure to check back often! 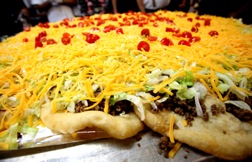 You don’t just crank out the World’s Largest Navajo Taco – and we’re talking Guinness Book of World Records large – in the family kitchen during halftime. That’s like expecting Billy the Kid to escape from the Lincoln County Jail in broad daylight. Oops – bad comparison.

Still, making the World’s Largest Navajo Taco is going to take some rehearsal – and that is exactly what the good folks in Gallup did last week in preparation for “Wild West Day” September 10, 2011 – the latest installment in the New Mexico Tourism Department’s “Catch the Kid” summer travel promotion scavenger hunt.

Don’t take our word for it; visit www.youtube.com/nmtode. Seeing is believing.

Building of the BIG Navajo Taco is set for September 10th in Gallup, beginning at 10 am at the downtown Courthouse Square. Following press photos and the international acclaim that is sure to follow, visitors can partake of the short-lived masterpiece free of charge. That’s right, there IS such a thing as a free lunch.

The World’s Largest Navajo Taco aside, Gallup may not be the “Seven Cities of Gold” that Coronado was hoping to find, but it is the epicenter of Native American history, art, culture and tradition; the Adventure Capital of New Mexico; and a great place to spend a Saturday.

When Route 66 came through town in 1926, numerous motels and service business joined the dozens of Indian Trading Posts that sprouted up displaying Native American arts and crafts to the many travelers along the Mother Road. Many of these vintage trading posts can be seen today, along with galleries, gift shops, old motels, and restaurants along historic Route 66 in Gallup.

In 1937, a Gallup icon was born when the El Rancho Hotel was built by the brother of the movie magnate, D.W. Griffith. The hotel quickly became the temporary home for many Hollywood stars as well as a stopping point for tourists driving on old Route 66.  Now it hosts one of the clues you might just need if you hope to “Catch the Kid.”

While the creation and ingestion of the World’s Largest Navajo Taco forms the obvious centerpiece to the community-wide events that make up Gallup’s “Wild West Day” September 10th schedule, it is not the lone attraction.

The day begins with a Family Trail Ride, 7-9 a.m., from the Gamerco Trail Head on the High Desert Trail, sponsored by Adventure Gallup & Beyond; and the Hot Air Balloon Mass Ascension from the Fox Run Golf Course at 7:30 a.m., sponsored by Red Rock Balloon Rally.

Bring your own shotgun and shells and create some noise in the Wild West Trap Shoot at the Gallup Shooting Range, 9-11 a.m., sponsored by the Gallup Shooters Club. The cost is $4 per round for targets or clay birds.

Following the vanishing of the World’s Largest Navajo Taco from the Courthouse Square, Indian Dancers will entertain 2-3 p.m., sponsored by Gallup Inter-Tribal Indian Ceremonial; and the Gunslinger Blues Guitar Contest, sponsored by De Chaves Music and featuring Levi & The Plateros, begins at 4 p.m.

The Sunset Pyramid Hike is 6:30-8:30 p.m. along Pyramid Trail at Red Rock Park, sponsored by Adventure Gallup & Beyond (bring your own flashlight and water); and the day’s activities conclude downtown with the Wild West Arts Crawl & Shoot Out, 7-9 p.m., featuring a shootout on Coal Street between Second and Third.

Northwest New Mexico is also home of Sky City on Acoma Pueblo, the oldest continuously inhabited community in the U.S; Chaco Canyon – for 500 years the center of a culture that united a vast area of the Southwest; Bluewater Lake State Park; and Grants, surrounded by the Bandera Ice Caves, El Malpais National Monument, El Morro National Monument and the New Mexico Mining Museum