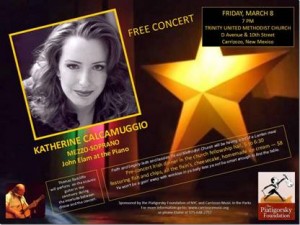 The Piatigorsky Foundation of NYC and Carrizozo Music in the Parks are sponsoring a  concert on Friday, March 8 at 7Pm at the Trinity Methodist Church in Carrizozo. The performance will feature award winning mezzo soprano Katherine Calcamuggio accompanied by pianist, John Elam.   The concert is free to the public and accessible to all.

Prior to the concert, members of the Trinity United Methodist Church will host an Irish dinner of fish and chips with all the fixin’s, cheesecake and homemade ice cream for $8. They will be serving from 5-6:30.  Dine in the church fellowship hall, then move to the sanctuary and listen to Thomas Radcliffe perform on guitar and Spanish laud  during the interlude between dinner and the concert!

A reception will follow the concert with an opportunity to chat with the musicians.

The next concerts in our series will be Anne Eisfeller, Concert Harp, on Thursday, April 18 at 2pm at the Old Gym of the Carrizozo School Campus.  Friday, April 19 at 7pm  Anne will play duets with Valerie Potter, principal flute for the NM Philharmonic.  Both concerts are free and open to the public.

For over 22 years, The Piatigorsky Foundation’s commitment to artistic excellence and public outreach has fascinated many avid concert goers, as well as curious first-timers. It is this combination of complimentary access, flamboyant performances, and human warmth that makes Piatigorsky Foundation concerts so appealing to diverse audiences. Last
year, the Foundation presented a tour of 10 concerts in New Mexico reaching over 1,990 people in Lovington, Jal, Carrizozo, Albuquerque, and Hobbs. In an effort to serve more communities this season, for the very first time The Foundation will present two tours in the state. The Fall tour took place in November 2012, and the Spring tour will take place March 2013, beginning in Tatum and concluding in Carrizozo. 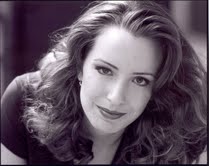 KATHERINE CALCAMUGGIO is an award-winning mezzo-soprano whose talent distinguishes her as one of the most promising young vocalists on the opera scene today. In the past four seasons, Calcamuggio has been featured in important role and company debuts across the United States, eliciting kudos for her “soaring, rich voice” (The Miami Herald), her “polished musical and dramatic characterizations” (Kurt Weill Newsletter) and her “fine coloratura technique” (Philadelphia Inquirer). Auspicious operatic and symphonic debuts from recent seasons include roles as Hansel in Humperdinck’s Hansel and Gretel; Siebel in Gounod’s Faust; Stephano in Roméo et Juliette (for which Calcamuggio was named “Artist of the Year” in 2009 with Syracuse Opera); Sesto in Handel’s Giulio Cesare and Un Musico in Manon Lescaut with Florida Grand Opera; the Young Nun in the world premiere of Stephen Hartke’s The Greater Good (available on the Naxos label) and Aglaonice in Philip Glass’ critically-acclaimed Orphée with Glimmerglass Opera. Ms. Calcamuggio is currently working on her doctorate at University of Michigan and holds a Master of Music degree from  Northwestern University and a Bachelor of Music degree from Bowling Green State University.

A native of Cleburne, Texas, JOHN ELAM is a Master’s student at the University of Michigan studying collaborative piano, where he is a student of Martin Katz. He received his BM and MM degrees in Piano Performance from Baylor University, where he studied with Jane Abbott-Kirk, Jeffrey Peterson, and Vincent de Vries. Mr. Elam has served as music director for Fiddler on the Roof, Joseph and the Technicolor Dreamcoat, and Urinetown, while also serving as rehearsal pianist for Igor Stravinsky’s The Rake’s Progress this past spring. In addition to his work in musical theater and opera productions, Mr. Elam has extensive experience as a choral pianist, having performed with the Texas All-State Choir. He made his solo debut with orchestra in 2004 with the Grieg Concerto in A minor and has performed at the Meyerson Symphony Center in Dallas and Symphony Hall in Detroit.

Evan Drachman established The Piatigorsky Foundation in 1990 in honor of his grandfather Gregor Piatigorsky. Piatigorsky deeply believed in the healing and inspiration power of classical music. He once said, “Music makes life  alive. It is magnificent. And it is for everyone”. Through his sizzling artistry and charismatic personality, Piatigorsky thus enlivened his mission by performing for millions of people around the globe. The Piatigorsky Foundation is committed to carrying on Piatigorsky’s noble aspiration by
evoking cultural curiosity through educational and accessible live performances.